A Case of Tree Blindness

This week, I went on a long walk on the Olentangy Trail in search of different trees to identify and study. Beforehand, I read an opinion piece by Gabriel Popkin published in The New York Times. In the article, Popkin wrote about a phenomenon known as “tree blindness”. Oftentimes, we don’t really recognize what trees (or plants, for that matter) are all around us and, if we do, we lump many different trees under one species or genera without a second thought.

I agree with Popkin’s insight on tree blindness, as well as his point that it’s curable. I think that people, in general, are plant blind, but have more trouble differentiating between different trees because the greenery often blends together. I’ve always tried to be aware of the plants that surround me, but I’ve never been quite good at identifying tree species. Even after my adventure to identify different tree species, it can be hard to focus on and recognize differences between trees. However, I know that I’ve made progress and I believe that small steps can really help us, as a society, gain a greater appreciation for the variety that nature has to offer.

Popkin also discusses the ecological and personal impacts of tree blindness and how we could help the ecosystem and ourselves if we took time to understand the trees we’re around. We could formulate better plans for restoration and conservation, find more abundant food sources, and relax by looking at and engaging with nature more deeply. Tree blindness can be overcome through small steps, if we know where to begin.

I figure the best place to start is by learning how to identify trees and studying a few at a time. All of the trees below were found at some point on the Olentangy Trail, from Tuttle Park to the Wetlands Research Park. On my very long walk, I looked at a lot of trees. It was a sea of leaves and twigs and trunks and, at first, it was hard to distinguish between the trees. After the first few identifications, though, it was much easier (and less frustrating) to differentiate and identify the plants around me.

My first tree encounter was with the ash-leafed maple, which I found many times on my journey, often on the edge of the trail and surrounded by smaller plants and shrubs. The ashleaf maple (also called ash-leafed maple, box elder, or boxelder maple) was quite a confusing tree for me. At first, I thought it was an ash tree, due to the leaf similarities, but I was able to point out the differences between them after seeing the variety between leaves on other ashleaf maples. 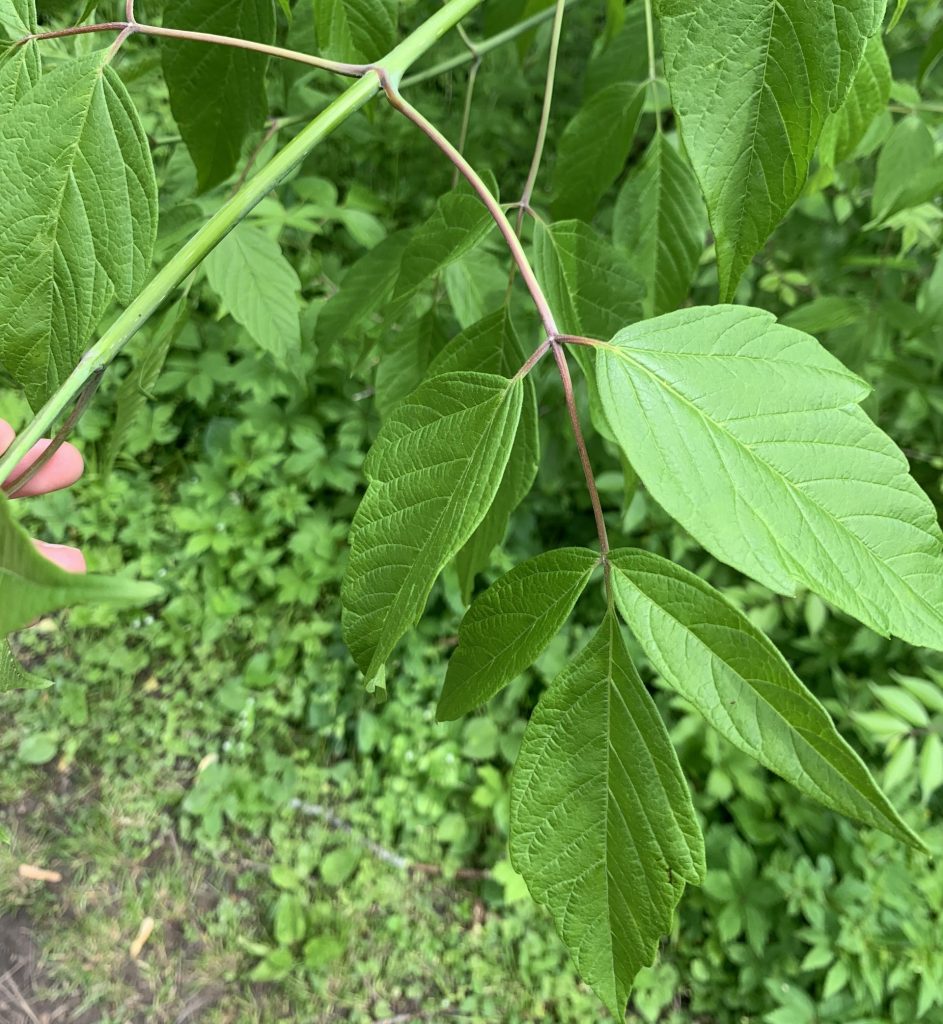 First ashleaf maple I saw on my walk 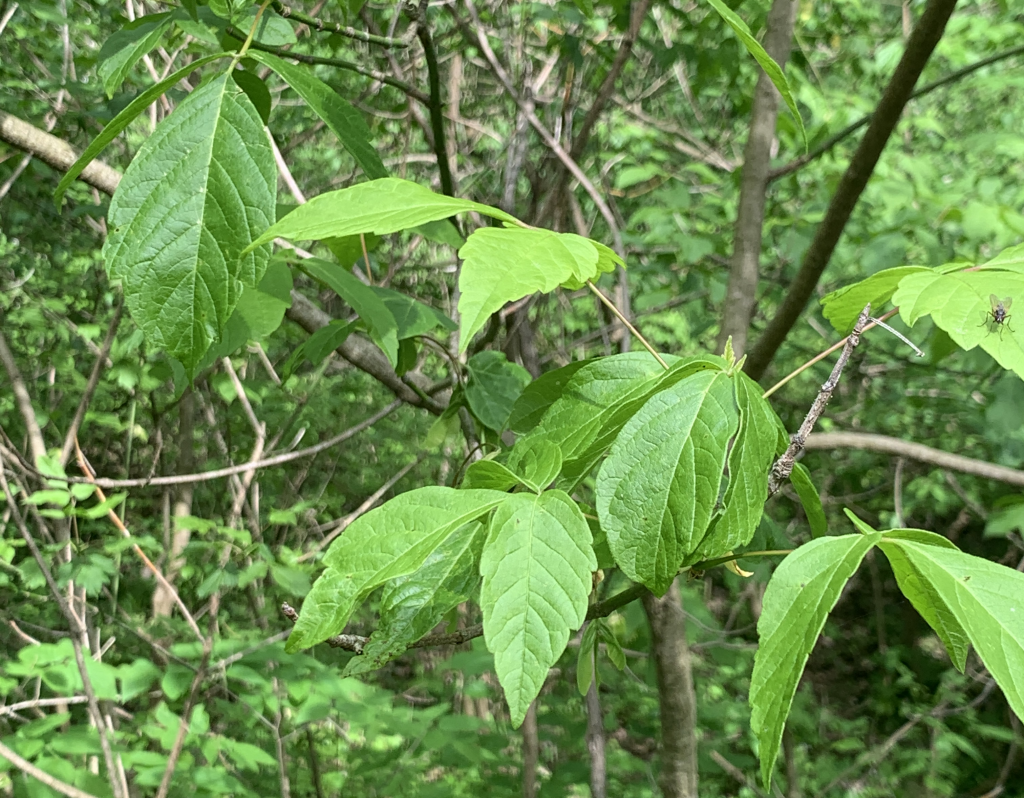 Ashleaf maples, although part of the genera Acer, have leaves that look quite different than the maple leaves we’re used to. The leaf arrangement is opposite, like other maples, but these trees have a feather-compound leaf complexity typically consisting of 3-5 leaflets. They often have noticeable toothed edges and are less lobed than other maple species. I found that, among the varieties of ashleaf maples I encountered, many of the leaves had uneven lobed edges and some only appeared wavy at the edges.

As noted in the Peterson Field Guide, syrup can be made from its sap, as with other maple trees. However, syrup is not something I associate with this tree and I didn’t realize that it could be used in syrup-making like other maple species.

The second tree I encountered that I wanted to study was an American hackberry (also called common hackberry). I was intrigued by this trees leaves because of their small serrated edges and pointed tip that looked unlike the smooth or largely-toothed trees I’d seen before. This tree was found on a corner of the trail, near some small trees and shrubs. 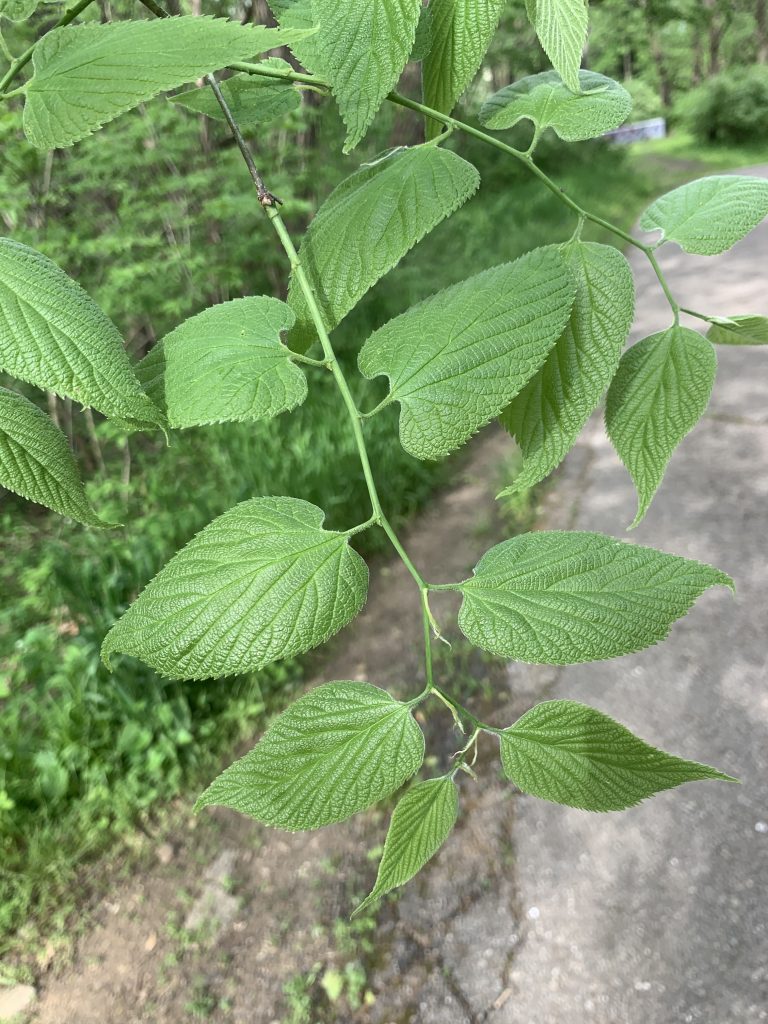 The common hackberry tree has broad, alternately arranged, simple leaves. The leaf arrangement and complexity are seen in the photo above, as well as the leaves’ toothed edges and fanned vein pattern. These leaves are never lobed, so the serrated edges are a big clue to this tree’s identity. These leaves also have uneven leaf bases and, as I mentioned earlier, are long and pointed at the tip.

The fruits of American hackberries are called “sugarberries” and are a favorite of many birds, including pheasants and wild turkeys!

The white ash was another tree that I found difficult to identify, due to visual similarities between itself and the green ash. I found this tree a few feet from the trail edge, near few small trees. 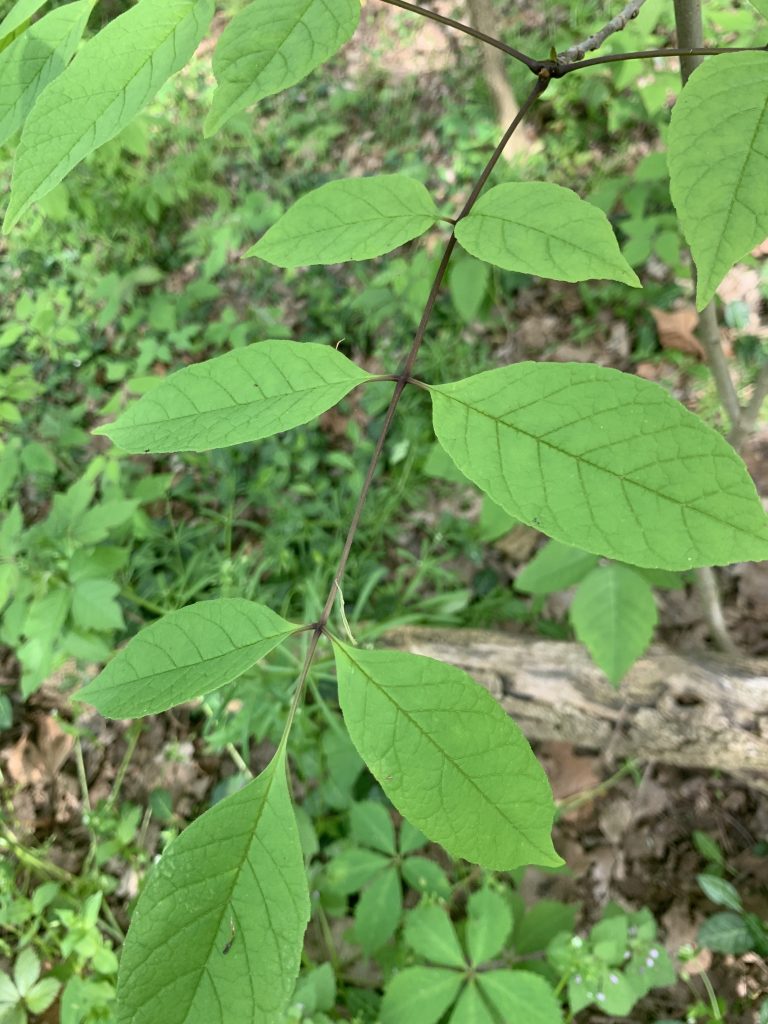 Ash trees, according to the Peterson Field Guide to Trees and Shrubs, are characterized by broad, opposite, compound leaves  (particularly, their feathered leaf structure). White ash trees typically have stalked leaflets that occur in groups of 5-9 and can be toothed or not, as seen in the image above. This is the same case in the green ash, but green ash trees are found in lowland areas such as stream banks and floodplains. The tree I identified, although similar to the green ash, was found in an upland wooded area, which helped me distinguish between the two species.

According to this page from Lake Forest College, the juice from white ash leaves can be used as a topical remedy for mosquito bites.

My next tree was found, again, on the edge of the trail, near a hill leading down to the Olentangy River. This tree, the white mulberry, caught my eye due to its interesting variety in leaf shapes. I found it surrounded by two or three other closely-knit trees and shrubs, but its unique leaf shape helped me distinguish it from its neighbors. 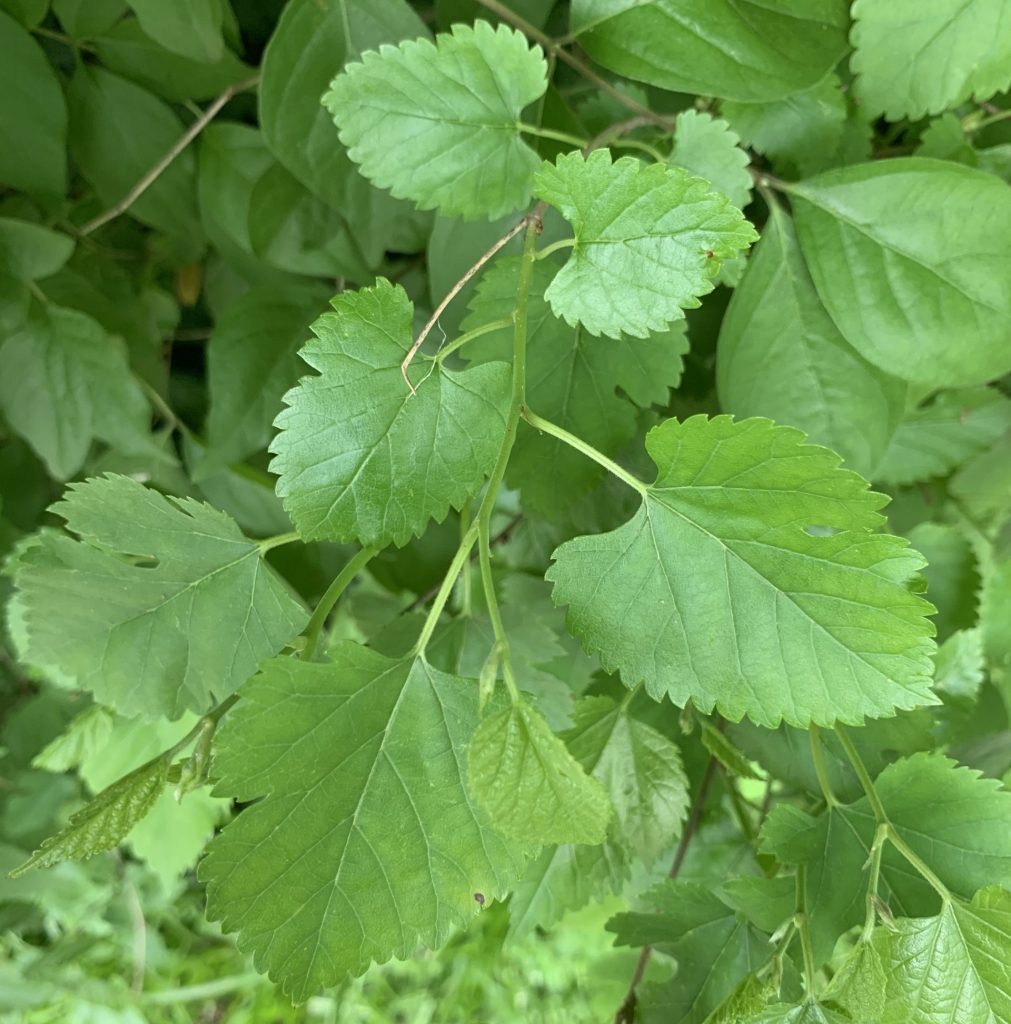 The Peterson Field Guide notes that white mulberries were introduced by the British (pre-Revolution) in order to try and establish a silkworm industry. It didn’t work.

This tree was quite simple for me to identify, as oak trees are a commonly-known tree with distinct leaf shapes. This red oak tree was found a few feet from the trail edge, near a bike rack and bench area. As oak trees are very tall, it was difficult for me to get a good picture up-close of a small section of leaves. 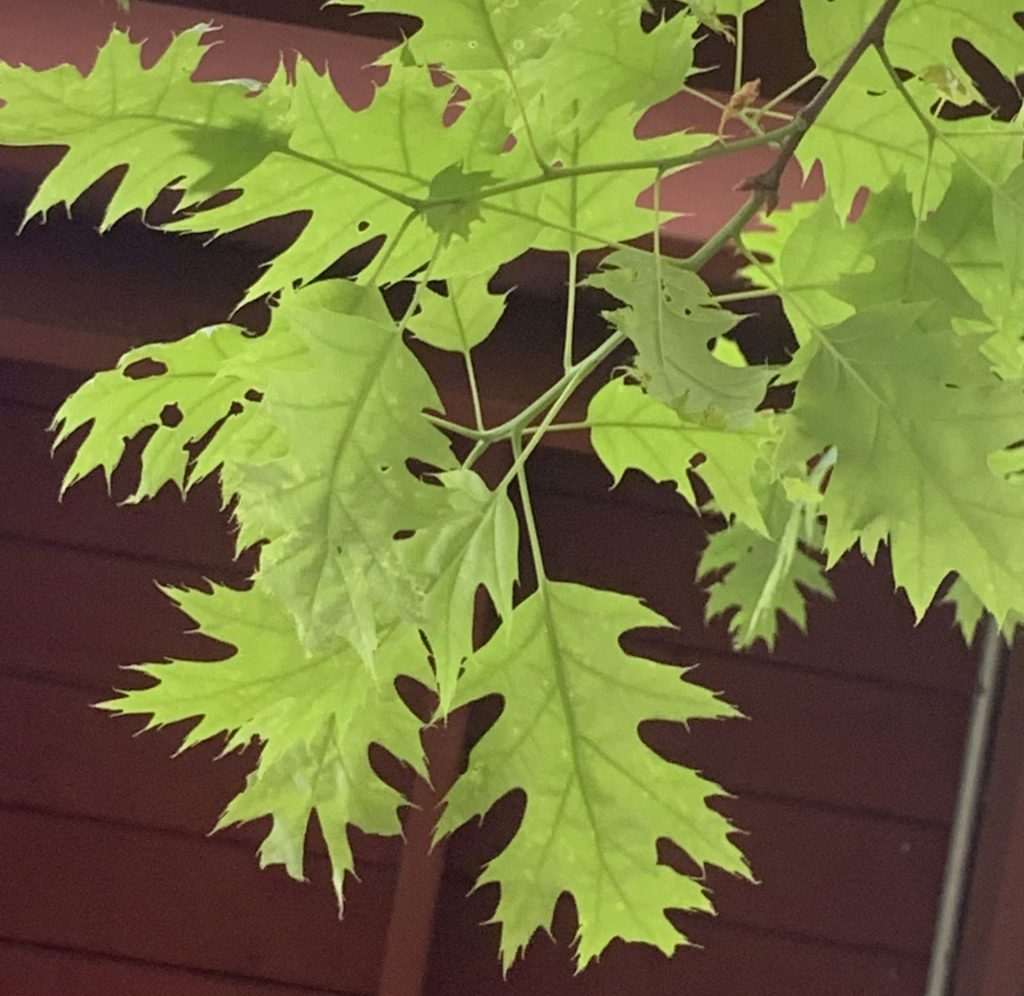 The red oak tree is yet another case of broad leaves with an alternate arrangement and simple complexity. Oak trees vary between three distinct leaf shapes: lobes without bristle tips, lobed with bristle tips, and toothed or wavy-edged. The red oak tree falls under the “lobed with bristle tips” category, and the bristle tips can be seen in the photo above. From what I was able to see, red oak leaves tend to have smaller U-shaped lobe margins, compared to other leaf shapes. They are also a northern variety, and the leaves are more dull.

Arborday.org makes a note that red oak have had great importance since colonial times, and it was believed that the first red oak transplant occurred in Bishop Compton’s garden in the 17th century.

Ah, yes, the famous Ohio buckeye. Of course I had to include it. This tree was found near a clearing by a wooded area of the trail, near a few other similar buckeye trees. 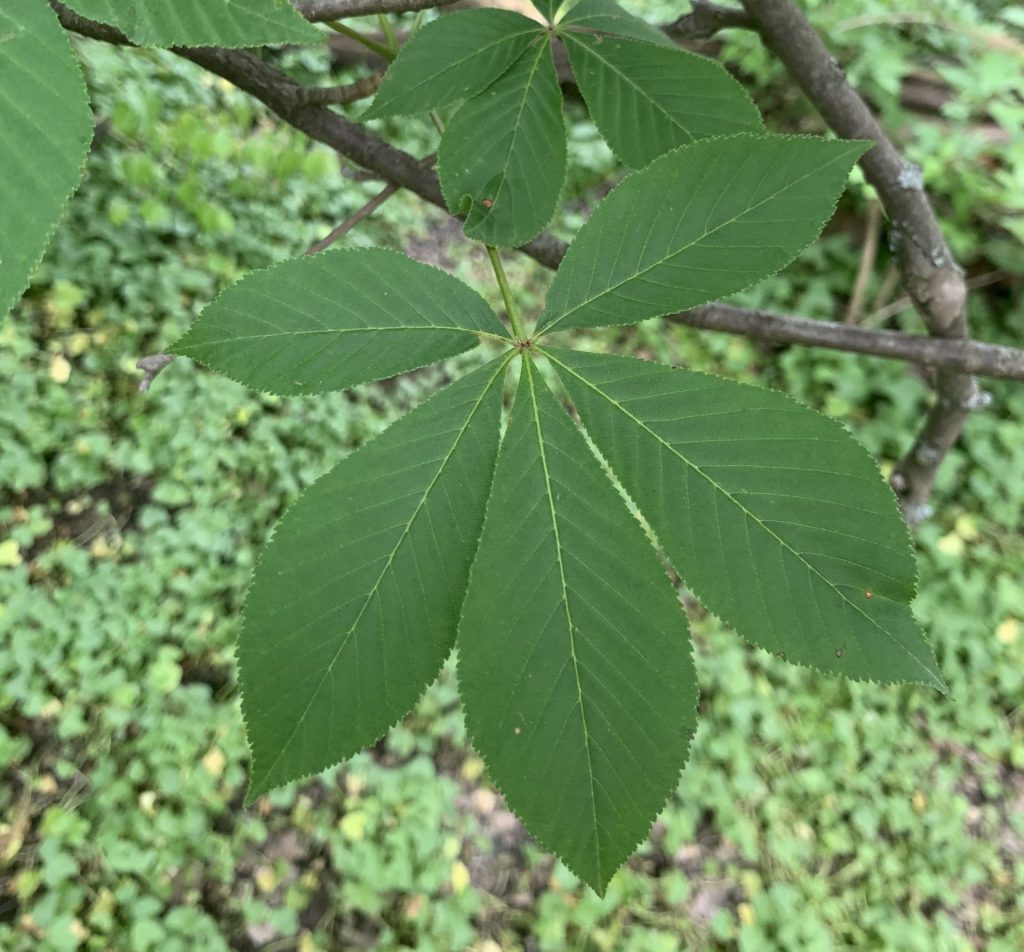 A compound leaf structure we haven’t seen yet! The buckeye tree is known for its unique palmately compound leaflets and alternate leaf arrangement. In fact, it’s the only tree or shrub with opposite, palmately compound leaves. The Ohio buckeye, pictured above, is similar to the sweet buckeye, but is found in moist woods and has rough bark and a not-great scent (read: odor) when its twigs are broken.

Apparently, the wood of the Ohio buckeye doesn’t split easily, and has formerly been used for artificial limbs!

Another tree that I recognized immediately! Sort of. I knew it was a maple of some kind, but I wasn’t sure what species it was. This was found at the top of a hill leading to the Olentangy River, and it was quite small, so it was easy to reach and photograph. 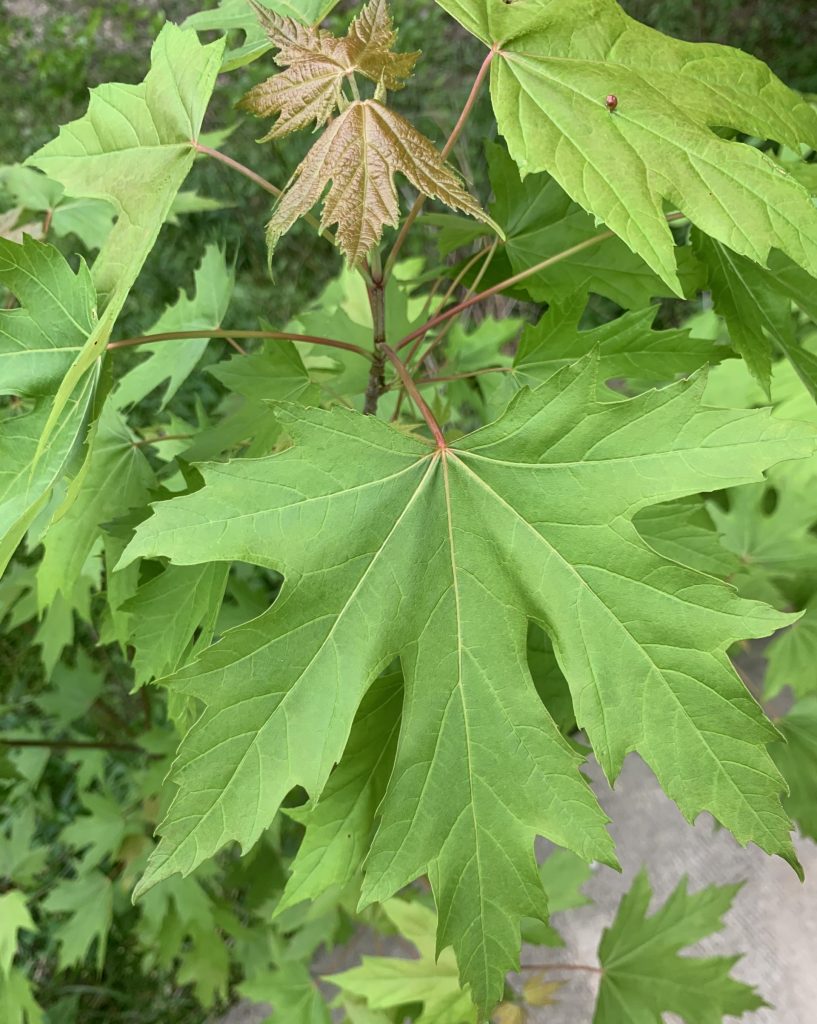 Silver maple leaves. Look at the little ones at the top!

Here’s the maple leaf shape we all know and love! Unlike the ashleaf maple (the outcast of maple trees, as I see it), other maple leaves have distinct, opposite, simple leaves with 3-5 lobes. Silver maple leaves, as the name may suggest, are silvery-white on the underside. A defining characteristic to distinguish them from other maples, however, is the deep notches between the top three lobes. Another distinguishing feature, not seen in the image above, is the flaking bark on its trunk.

Maple tree sap differs between maple species and, according to the Peterson guide, silver maple sap is sweet, but not as sugary as sap from the sugar maple (not entirely surprising).

Another unique leaf shape!! I love these ones, not because they’re easier to identify, but because it’s a nice change from all of the similar leaf shapes seen around the forests. This tree, another small one, was found a couple yards from the silver maple tree and was just as easy to photograph. 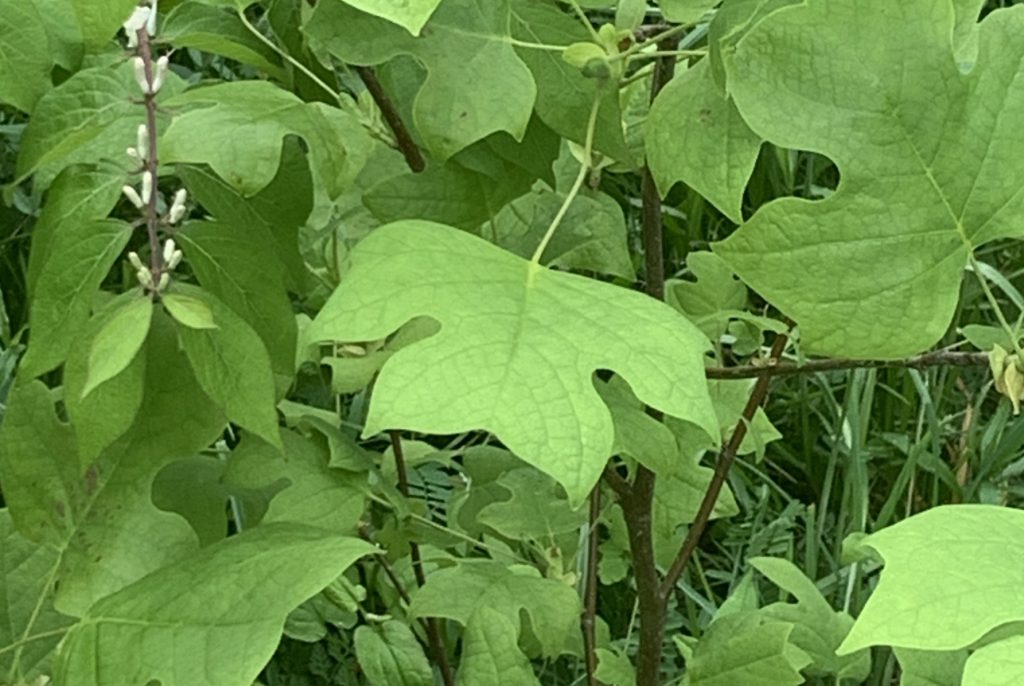 I don’t know why that one leaf stands out so much. It’s the star of the show 🙂

I think the Olentangy Trail’s favorite trees have broad, alternately-arranged, simple leaves. The tulip tree (or tulip-tree) has a distinct, fan-lobed leaf shape with four pointed tips and a notch at the tip. I find these trees quite interesting to look at, as the lobes of them look like butterfly wings. The leaves are also hairless, as well as the twigs, and their flowers are large and orange and green in color, though you cannot see any flowers in the picture above.

The Peterson guide says that they are widely known as Yellow Poplar or Tulip Poplar trees, but they are not relatives of true poplars. Instead, they are related to magnolias, who also have large flowers.

After reading Popkin’s piece, I felt more confident in my ability to cure my tree blindness. Popkin was right when he said that engaging with trees lets you leave the human-created world, at least for a short while. I felt like I was becoming more understanding of nature and I believe that anyone who adventures to identify a few trees and engage with them will feel the same. Yes, it may be overwhelming and frustrating at first, and people may think you’re a little weird for studying trees for hours at a time. That’s okay, though. It’s okay to be a little weird and discover the world around you.

For more about botany in the Buckeye State, visit ohioplants.org, the companion to Ohio Plants, EEOB 2210.